Karen Dwyer is an inspirational speaker and has been an award-winning college teacher, specializing in helping students and adults of all ages conquer their public speaking anxiety.

Karen is the author of 10 books including WRAP Yourself in JOY: Find the JOY & Fight the Fear, WRAP Yourself in Scripture,  Esther for Such a Time as This: Prayer, Reversals & Joy, Nehemiah—Rebuilding Hope & Joy in Your Life, The Joy of Advent—Journey with the People, Events &, Prayers at the First Coming of Jesus Christ, and iConquer Speech Anxiety.

Karen has been a guest on EWTN’s The Choices We Face and on several Catholic radio programs, including programs on Spirit Catholic Radio. She is the Coordinator for Magnificat-Omaha, founder of the Heart of Jesus Prayer Groups, a Council Member of USA Pentecost Today and has served on the Board of Directors for KVSS Spirit Catholic Radio and the national Mission Advisory Council for the Institute of Priestly Formation (IPF).

Karen says, “The Lord Jesus Christ wants to share His joy with you (John 15: 11).  He is the One who sustained me through great tragedy and gave me His JOY.  Our Heavenly Father, Jesus Christ, our Savior, and the Holy Spirit want to give YOU more JOY. “

Margaret is a Licensed Professional Clinical Counselor, Certified Trauma Therapist, Certified Intensive Trauma Therapy Instructor, both a Certified Traumatologist and Field Traumatologist and is Certified in Myers-Briggs. After over 15+ years treating trauma clients of all ages, presenting to a wide variety of groups in-person and through guest appearances on EWTN, radio shows, and podcasts, Margaret Vasquez founded Sacred Heart Healing Ministries which provides intensive trauma therapy, healing retreats, and trauma-informed care certification training. She began serving as a consultant for Franciscan University of Steubenville’s Institute for Diaconal renewal, and presenting workshops and retreats to religious, priests, deacons, and lay people. She now makes these same retreats and workshops available to you in her new book Fearless and through in person and online retreats and workshops.

Margaret suffered for many years as a traumatized person before finding healing and freedom through a variation of the therapy she has honed over the years. Due to this experience coupled with a degree in Theology from Franciscan University, she sees the challenges of life from a perspective of human and spiritual integration. Understanding that wholeness and holiness are inextricable interwoven, Margaret has a passion for helping you live in the freedom and peace the Lord has for you. 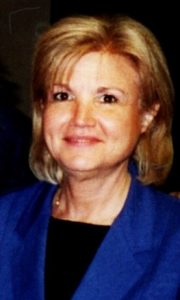 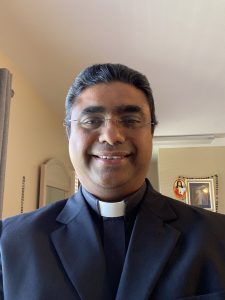 Fr. Saji Ellickal Joseph belongs to a religious congregation called Missionary Congregation of the Blessed Sacrament. The congregation began in 1933 in the Southwest state of India called Kerala, his home state. Father was born and raised in a small mountain city of Kerala called Bisonvalley. His parents, an older brother and a younger sister, both married, live there along with his five nieces and nephews.

When he was fifteen, he completed the 10th grade and joined the Minor Seminary of the Missionary Congregation of the Blessed Sacrament in June 1989 to begin his seminary formation. Studies included Philosophy from 1993 to 1996 and Theology from 1997-to 2000 in the Pontifical Seminary Aluva, Kerala. After completing almost twelve years of formation and education, he was ordained on December 27, 2000. As a newly ordained, he was sent to the Northern State of India, Rajasthan, to start his ministry as the Administrator of a catholic school that his congregation runs and as the pastor of the small church from 2001- to 2005.

Later, he completed a year of studies in Education to become the principal of a school in a different Northern State of India, Maharashtra, where he had a small parish. In 2007 he was sent to the Diocese of Memphis in TN, where he ministered for ten years. In 2017, he came to the Diocese of Venice, where he was appointed as the Parochial Vicar of St. John XXIII in Fort Myers.

In Father Saji’s words: “I really love being a priest and thank the good Lord for trusting me with this divine call to minister to the spiritual needs of the faithful. The most important inspiration for me to be happy is my devotion to the Holy Eucharist and seeking the intercessions of Our Heavenly Mother Mary.”

Our featured speaker has shared her personal journey of faith from Judaism to Christianity and subsequent entrance into the Catholic Church. For the past forty years, Debbie has worked extensively in youth and women’s ministry, speaking, leading mission trips, and mentoring high school and college age women. She has spoken at Franciscan University Conferences, Legatus chapters, and women’s events throughout the world. She is the founder and executive director of Pine Hills Girls Camp. Debbie is also the founder and director of the Be Love Revolution, a ministry that exists to help young women encounter Christ and be His love to all they meet.

She has written Safely Through the Storm: 120 Reflections on Hope, Firmly on the Rock: 120 Reflections on Faith, and Love Never Fails: 120 Reflections on Love. She and her husband Peter have co-authored a book entitled When the Spirit Speaks: Touched by God’s Word. Debbie is a frequent author and speaker for Blessed is She and contributing writer for Undone: Freeing your Feminine Heart from the Knots of Fear and Shame.

Debbie and her husband Peter live in Ann Arbor, Michigan and have 4 young adult children and 7 small grandchildren.